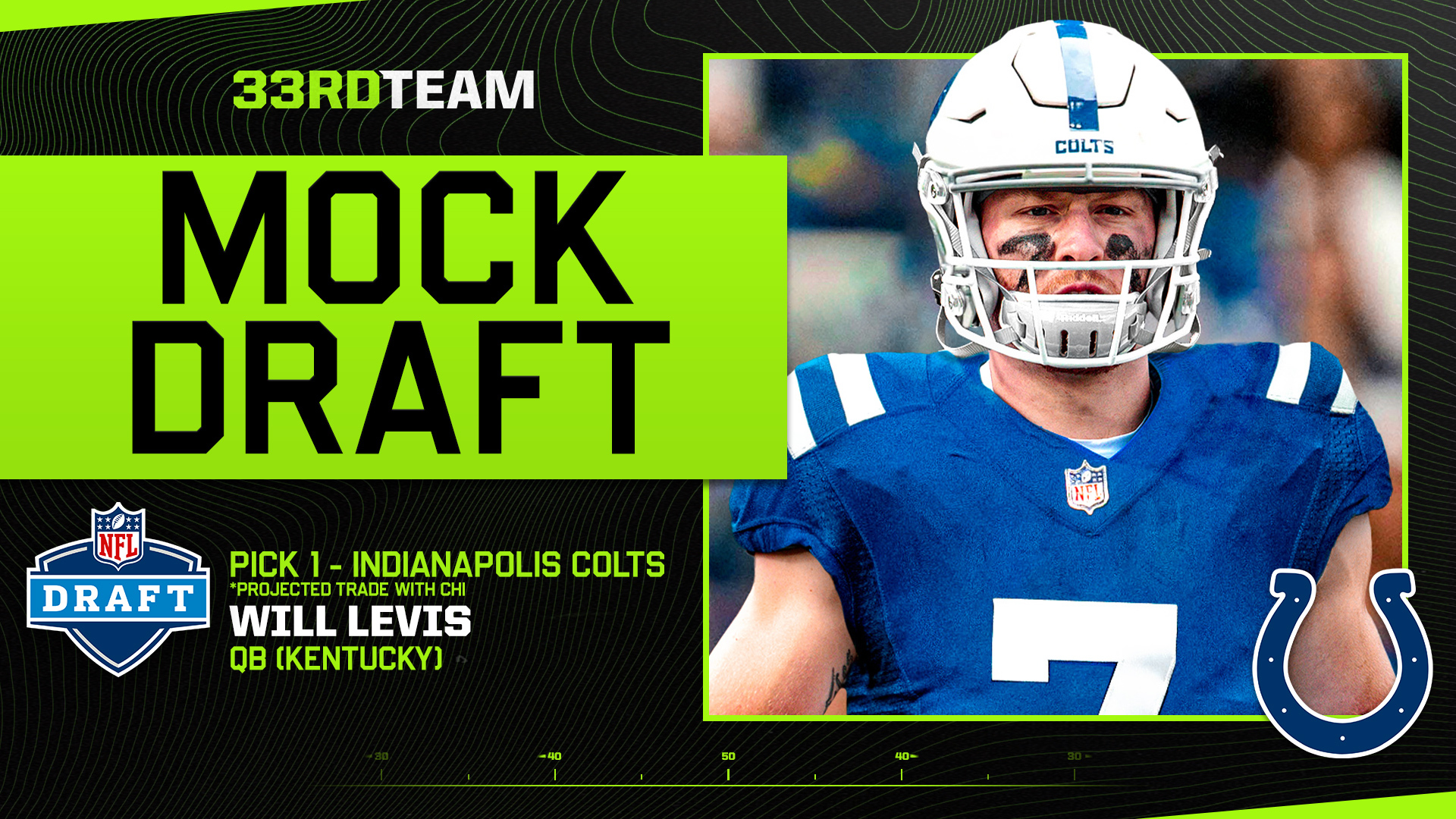 The Divisional Round of the NFL playoffs wrapped up Sunday, and that means the first 28 picks of the 2023 NFL Draft are officially set. The biggest mover was the Bills as their loss to the Bengals now has them picking 28th instead of 30th.

And the movement doesn’t end there. This mock draft projects a handful of trades, primarily as teams pursue quarterbacks.

The Colts’ gambles on expensive veteran signal callers has not panned out the past few years, so they go all-in to get their pick of the lot this year. The 6-foot-3, 222-pound Levis might be a controversial choice, but he possesses the physical tools and intangibles to grow through the adversity that all young QBs must face.

The Texans watch the Colts move ahead of them, but they get the guy they liked all along. There will be lots of questions about Young’s build (6-foot, 194 pounds), but he has rare presence and instincts for the position. His production during the past two seasons – 79 touchdowns vs. just 12 interceptions and 8,200 yards – is eye-popping.

When the Raiders are unable to sign Tom Brady or Jimmy Garoppolo, they are forced into an aggressive move to get one of the top three QBs in this class. The 6-foot-3, 215-pound Stroud needs to speed up his processing, but he has a lot of NFL traits and an NFL-quality arm.

Anderson starts from Day 1 and immediately improves their ability to get after the quarterback. He had 34.5 sacks and 58.5 tackles for a loss in three seasons. The Bears turn the No. 1 pick and their fourth-round selection into the top player on their board (Will Anderson), the 35th and 79th picks in this draft and an additional first-round pick in 2024.

The Seahawks never planned on taking a QB here with Geno Smith back for a couple more years. They need playmakers on defense, and Carter is as disruptive as they come. He is the No. 1-rated defensive player on our board.

The Lions offense proved itself this year, but there are plenty of holes on defense. One could argue corrner is a greater need, but Wilson is graded higher than any of the corners at this pick. He has the ability to rush off the edge (14 sacks, 27.5 tackles for a loss in the past two seasons) as well as kick inside on clear passing downs. The Cardinals have a new GM in Monti Ossenfort, and he makes a big move out of No. 3 to acquire picks and fill the many holes Arizona has on defense. The Cardinals’ leading edge rusher last season had just three sacks. Murphy, who had 14.5 the past two seasons, has the potential to double that as a rookie. Kaleb McGary is a free agent at right tackle, so the Falcons select Jones, who is athletic and plays with an edge to his game. He should fit in with the style that they are developing on offense. After acquiring a veteran quarterback in free agency, the Jets give up No. 13 plus their third (No. 74) to pick up the most athletic blind-side pass protector in the draft. The rest of their roster is ready to compete for a playoff spot if they can get competent play at LT and QB. The Eagles may lose James Bradberry in free agency, and Darius Slay is 32 years old. The 6-foot-2 Porter is the most physically gifted corner in this class. If he checks some boxes during the pre-draft process, he has top-10 type of ability.

It’s taking two first-round picks to replace A.J. Brown: Treylon Burks last year and now Johnston. He has big-play ability, is 6-foot-4, and plays the game with a physical edge.

Addison, who had 25 touchdown receptions the past two seasons, is a polished route runner who should pair nicely with Bryce Young. They should be able to quickly get on the same page.

Carolina moves down four spots and gets the most physically gifted QB while acquiring and an additional third-round pick. The 6-foot-4, 236-pound Richardson may be extremely raw, but the Panthers could do some things with him in the run game while he develops as a passer. New England had some issues at both tackle spots this season. There are some questions about the 6-foot-4 Skoronski’s length and his ability to play outside, but he is a good football player whose smarts and play style should be a good fit with the Patriots.

Robert Tonyan is a free agent and Marcedes Lewis will be 39 when the season starts. Whether it is Aaron Rodgers or Jordan Love, Mayer would be a reliable target, which is something they did not have this year. He had 16 touchdown receptions the past two seasons. Witherspoon is an instinctive, hard-nosed corner who should fit right in on their defense. Robert Spillane and Devin Bush are slated to be free agents. When you think of great Steelers defenses, they always have featured playmaking inside linebackers. Simpson has the skills to make plays all over the field. Detroit has to solidify its defense. The 6-foot-2 Gonzalez has the length and athleticism that the NFL covets, and he has consistently improved throughout his career. Tampa Bay missed the edge-rush presence of Shaq Barrett in the second half of the the season. Young is raw but dripping with explosiveness. Seattle had a loaded draft last season and got a steal with Tariq Woolen in the fifth round. This season, they begin the draft with two blue chippers from the two-time defending FBS Champs. The Miami Dolphins forfeit their first-round pick in the 2023 NFL Draft. GM Tom Telesco said this week that they needed to get faster at WR. There is no one with more explosive game speed in this draft than Hyatt, who averaged almost 19 yards per catch and scored 15 touchdowns.

J.K. Dobbins is a nice player but Robinson, who piled up 3,316 scrimmage yards and 35 total TDs in 2021-22, is just flat out better. If not for the positional value, he has top-5 type ability and tape. 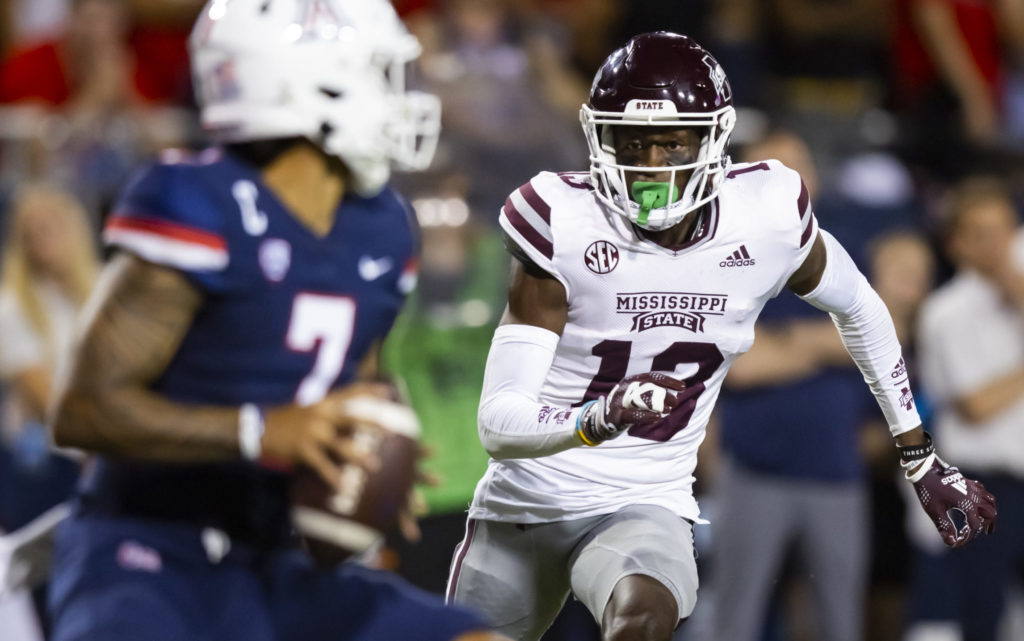 Minnesota needs help in the secondary to improve its 31st-ranked passing defense. Forbes will bring a swagger and big-play ability (six interceptions returned for TDs in three college seasons) to that group. Teams in the AFC need to have a stable of coverage players to counter the depth of quality quarterback play littered throughout the conference. Branch is a versatile chess piece who plays with outstanding instincts and toughness. Credit to Brian Daboll and his staff for piecing together production at the receiver position this season, but they need to add more consistent playmaking ability on the outside. Rice has the ability to stretch the field as well as pick up chunk plays after the catch. He would immediately be an upgrade in the Giants’ receiver room.

The Cowboys are going to have some interesting decisions with Tony Pollard, Zeke Elliott and Dalton Schultz. If they do elect to keep Pollard, adding a playmaking mismatch TE might be the best way to support their franchise quarterback. The Bills should be looking for safety help this offseason with Jordan Poyer set to be a free agent and Micah Hyde nearing his mid-30s after missing the majority of this past year with a neck injury. Johnson is an excellent athlete with man coverage skills to match up with the best tight ends in the game. Eli Apple has been inconsistent and Chidobe Awuzie missed this season with an ACL injury—both are scheduled to be free agents. Cam Smith has an elite skill set and knows what it’s like to face elite athletes on a game to game basis. New Orleans jumps back into the first round by trading the rights to Sean Payton to the Broncos (pick from Bradley Chubb trade). Cam Jordan will be 34 next season and Marcus Davenport is a free agent. The Saints have a specific body type that they like in their edge players, and Carter fits that mold perfectly. 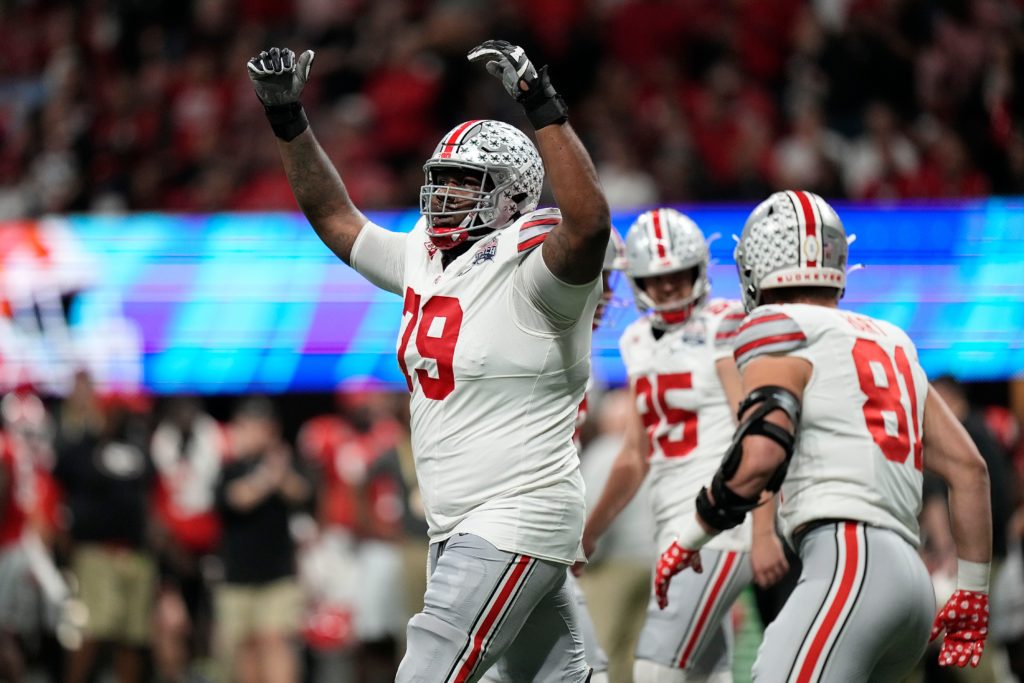 Jones is a massive human with vice grips for hands. He is very similar to Orlando Brown Jr. He could either step into his spot if they are unable to re-sign him or start on the right side. The Eagles have age and free agency questions in the interior of their defensive line. Bresee was in consideration for their first selection in this mock draft, and things continue to fall into place for them, landing the talented lineman with the last pick of the first round.