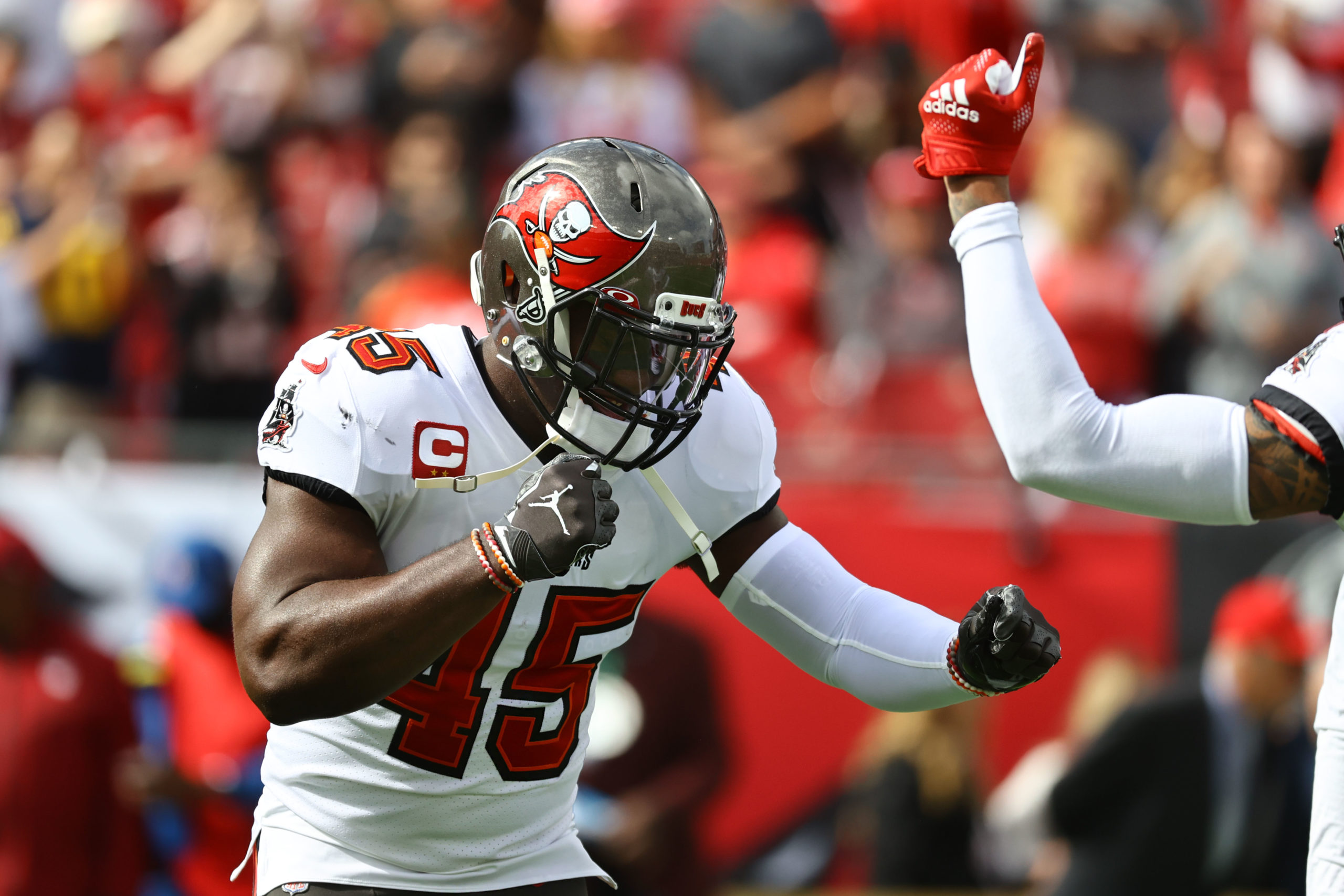 In the past, pressures have been the best indicator of future sack totals for pass rushers, even more so than sacks themselves. Because not all sacks are the same, it is not always the most reliable statistic to look at when judging performance or projecting for the future. That is where seeing actual versus expected sacks comes in handy.

Instead of using at sacks, using a player’s pressure total can be more useful to look at. The number of pressures show which players are most consistently getting to the QB and disrupting the offense.

Just last year in 2020, Jason Pierre-Paul had 9.5 sacks in a Pro-Bowl season but did not have the pressures to back that number up and was expected to have over 4 fewer sacks than he did. Then, this season, Pierre-Paul had just 2.5 sacks and is currently not with a team, as his sack total from 2020 was not sustainable.

By calculating the total sacks as well as the total pressures in the NFL last season, then dividing the two, we can find the league-wide pressure to sack conversion rate, 23.74%. After that, by multiplying the pressure to sack conversion rate by the number of pressures each defender had, we can see the number of sacks each player was expected to get. Above are the top 50 pass rushers by Pro Football Reference’s pressure numbers in 2021. On the Y-axis are the actual sacks each pass rusher had. On the X-axis features their expected sacks using the league-wide pressure to sack conversion rate.

On the other hand, players like Jerry Hughes, Rashan Gary, and Devin White stick out as players who underperformed in terms of converting pressures to sacks but may have higher sack totals in future seasons if their pressures stay up.

Using the number of sacks each player was expected to have and comparing it to their actual sacks, you see which players overperformed and which underperformed.

Quinn has produced for years but had a career season in 2022. Coming off a two-sack and 16-pressure season, Quinn upped his pressure total to 34 this season. Quinn’s 34 pressures were very impressive, but that number ranked just 19th in the league. While he had a remarkable 18.5 sacks, good for second in the league. The large conversation of sacks led Quinn to have the highest difference in actual vs expected sacks.

Aside from Aaron Donald, Watt has been arguably the best defensive player in football and had his best year in 2021. Watt had the most pressure in the league but also had the most sacks. He was so good at bringing down the quarterback that even with the highest number of pressures. He still was projected to have over 10 fewer sacks than he actually had.

Another player who has been a productive pass rusher for years, like Quinn, also had 34 pressures. While not quite as good at converting sacks, Jordan still overperformed his expected sack total by over four sacks. This could mean that Jordan may have fewer sacks next year, despite his consistent performances.

Despite being 33 years old last season, Hughes was still a full-time starter in Buffalo. Throughout recent years, Hughes has not seen high sack totals but has consistently generated pressure. 2021 was not much different, as he ranked in the top 50 in pressures with 26 but had just two sacks to show for it. Now 34 years old and on a new team, Hughes could see an increase in his sack total. This of course as long as he keeps up the same pressure numbers.

A young linebacker who has played just three years in the league, White has shown to be a very effective pass rusher. White is coming off a nine-sack year, where he had 20 pressures. White actually pressured the QB on more snaps in 2021, as he did so 31 times. This would have him ranked 28th in the league. That said, White converted just 4 of those pressures into sacks, as he totaled 3.5 on the season. The difference between his expected sacks and actual sacks was the second largest, only behind Jerry Hughes.

Like White, Van Ginkel did a great job getting after the QB through blitzes from the LB position. Again, like White, the third-year LB has proven his underrated ability to rush the passer. Last season Van Ginkel had just 11 pressures but converted six of them to sacks. This allowed him to finish the season with 5.5. In 2021, Van Ginkel was productive with four sacks, doing so on 31 pressures. He was expected to have over three more sacks though.

Charlie Parkinson contributed to this report.