The $30 million APY figure has historically been reserved for quarterbacks.

Today, the Rams’ defensive tackle received an extension that puts him in that same category. With a restructured 3-year, $95 million deal, Donald becomes the first defensive player in the history of the NFL to enter the $30 million APY club. The “extension” – which effectively amounted to a pay raise in order to lure the 3-time Defensive Player of the Year away from retirement – will result in a $31.67 million APY over the next 3 seasons.

While he was slightly undersized coming out of college, he has been an all-time great ever since he was a rookie and certainly deserves this extension. At just 31 years old, he’s tallied 8 Pro-Bowls, 7 First-Team All-Pros, 2014 Defensive Rookie of the Year, and 3 DPOYs in such a short time. He’s also been the highest graded defensive player in the league, as graded by PFF, each of the past 7 seasons.

Not only is Donald dominant, you can see him close out the Super Bowl and by constantly getting double teamed, he creates production for others around him. The Rams defense as a whole was Top 5 in the league in sacks 4 of the past 5 seasons.

Prior to signing this extension, Donald’s contract was slotted at $18.33 million APY over the next 3 seasons. This would have made him the 4th highest paid interior defensive lineman and 7th highest paid edge rusher. Increasing Donald’s pay to over $30 million APY, making him the highest paid defensive player in the league, is well worth it for the Rams to keep the best non-QB in the NFL on their roster.

When comparing Donald’s new contract to other players around the league who are the highest paid at their position in terms of APY, you can see just how record setting this contract really is. 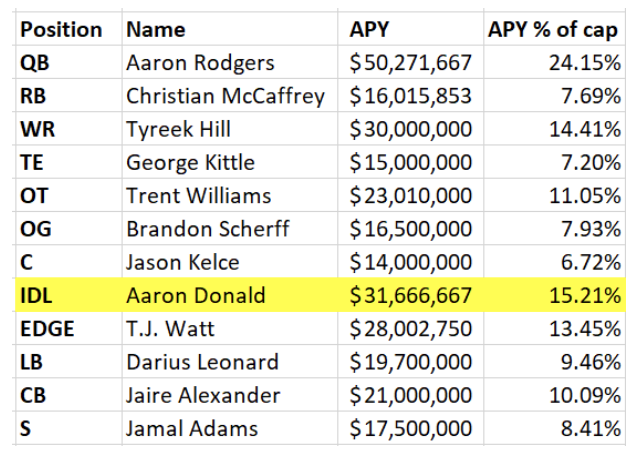 Donald will be the only non-QB in the NFL whose APY exceeds 15% of his team’s cap this season. Tyreek Hill is the next closest, but his $30 million APY is realistically $25.37 million and only 12.18% of the 2022 cap when you take into consideration the $43.9 million non-guaranteed base salary in the final year of the deal.

Donald is clearly a special player, and the next wave of interior defensive linemen should not expect to be compensated in the same range as him, but he has certainly raised the bar for game changing defensive players across the league.