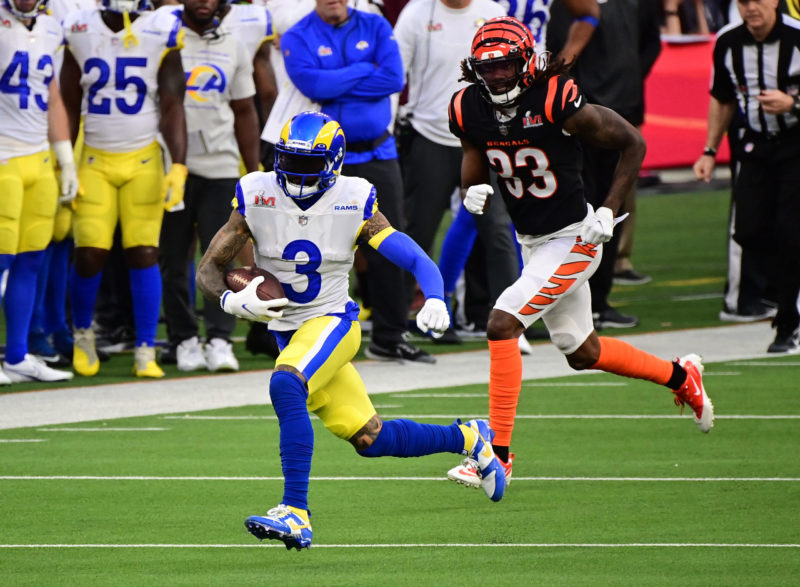 Although this offseason’s free agent frenzy is behind us, there are still players that could help push a contending team over the hump. Here’s a look at some available free agents (in no particular order) that could still have something to offer an NFL team.

Regardless of whether that organization is mining for depth, stretching to cover an injury, or looking for a difference maker.

Odell Beckham Jr. is coming off one of the most bittersweet endings to a season in NFL history. Beckham Jr. tore his ACL during the Rams’ Super Bowl victory against the Cincinnati Bengals back in February.

The former 2014 Offensive rookie of the year and two-time All-Pro was instrumental in helping the Rams make their Championship run, including a stellar nine-catch, 113-yard effort against division rival San Francisco in the NFC title game.

Given Beckham’s track record of success, he should have a long list of teams eager to work him out.

Another former Rookie Of the Year, Sheldon Richardson has spent part of the last six seasons with five different teams. After signing a three-year, 21 million dollar deal with the Cleveland Browns in 2019, Richardson has been a solid but unspectacular asset to a multitude of defensive line units.

The 31-year-old former Pro Bowl selection brings experience and physicality upfront and could serve as a mentor to the team’s younger pass rushers.

A five-time All-Pro with more than 70 career sacks, Suh has spent each of the last three seasons on successive one-year deals with the Tampa Bay Buccaneers. Suh was an important member of their Super Bowl victory two seasons ago.

Suh is an asset for a team looking to add depth and experience to its front seven. He would be of special value to a team lacking in playoff experience but looking to make a deep run.

The physicality of the offensive line position is nearly unmatched in modern sports. As a result, most NFL offensive linemen have a relatively short shelf-life. Duane Brown is not “most” NFL offensive lineman. Now entering his 15th NFL season, Brown has yet to find a spot on a league roster. But it might not be a long wait.

Offensive tackle is a fickle position and injuries are commonplace. If a contending team finds itself in need of blindside protection due to injury, Brown should be among their first choices. Even if teams manage to stay healthy at the position, it’s possible that—as the season approaches— teams without a sure answer at the tackle position might start looking for an upgrade.

Fuller played in just four games last season after breaking his finger with the Dolphins. He played 11 games in 2020 for Houston, and was absolutely electric, catching 53 passes for 879 yards and eight touchdowns.

Still, as the old football adage goes, “you don’t give up on talent.” And Fuller, who is a former first-round draft choice, is oozing with talent. If Fuller can prove he’s back at 100% and running at the 4.3 speed that got him drafted in the first place, he won’t be out of work for long.

As the (literal) centerpiece of Cleveland’s line last season, Tretter helped them up the fourth most rushing yards in the league. The former 4th-round pick out of Cornell was a workhorse, taking the field for 100% of the Browns’ offensive snaps while committing just four total penalties.

Tretter is highly respected among his peers—twice named the President of the NFL Players Association—and has earned two extensions from the Browns. But with fellow lineman Jedrick Wills, Jack Conklin, Joel Bitonio and Wyatt Teller all earning at least 4.8 million dollars next season, it was difficult for the Browns to justify another extension for Tretter.

One team that will certainly have its eye on Tretter is the Tampa Bay Buccaneers. Tom Brady’s squad is waiting for more news on a knee injury that resulted in center Ryan Jensen being carted off the field.

Ryan Jensen just went down for Bucs and being carted off. He threw his helmet, which is not a good sign.

Tretter could step in right away and become the team’s starting center. He’s got the experience and pedigree to replace Jensen better than anyone on the market.

Back in 2019, the Minnesota Vikings elected to give impending free agent Anthony Barr a five-year, 67.5 million dollar contract extension. Coming off of four straight pro-bowl appearances, Barr was poised to take yet another leap.

Unfortunately for Barr that wouldn’t be the case. After missing a few games the year before, Barr missed almost all of the 2020 NFL season.

As a result, the Vikings chose to restructure Barr’s contract, so he became a free agent at the end of this season. Almost any contender should be eager to add the versatile and physical linebacker. For the right price that is.

Following a 2018 season with the Patriots that ended in Super Bowl glory, Flowers inked a massive five-year, 90 million dollar deal with the Detroit Lions. The standout linebacker was supposed to be a centerpiece of new Head Coach Matt Patricia’s defense.

Unfortunately for Lions fans, neither Flowers, Patricia nor the defense was successful. After starting only 12 games total in the last two seasons due to injury, the Lions made the decision to release the embattled veteran.

Although he hasn’t found a suitable contract partner up until this point, players with his level of Super Bowl experience—and talent—are a rarity in the NFL. It’s possible a contender decides to give the two-time world champion a shot to reclaim his status as an elite NFL defender.

In an incredibly similar position to Brown, Fisher finds himself on the outside looking in following a long and successful career in Kansas City and Indianapolis. The two-time pro-bowler could end up as a depth option for a team looking to compete. Fisher could also lock himself in on the left side of the line for a team that needs immediate help.

A former first-round pick of the Detroit Lions, Ebron was something of a late bloomer coming out of UNC. Ebron finally and truly broke out in his fifth season. In his first season with the Indianapolis Colts, Ebron hauled in 66 catches for 750 yards and 13 touchdowns.

A massive target at 6-foot-4inches and 250 pounds Ebron was a solid contributor to the Colts and Pittsburgh Steelers, whom he signed with in 2020 for two years and 12 million dollars.

Unfortunately, last season didn’t go as planned for the former pro-bowler. Even before being placed on the season-ending IR in November Ebron had lost his starting spot to rookie Pat Freiermuth.

Still, a team in need of experienced playmaking at the tight end position may be interested in kicking the tires on Ebron to see if they can hit on a high-upside player.

In his first four seasons with the New York Giants, safety Landon Collins went to three pro-bowls, was a first-team All-Pro and finished third in Defensive Player of the Year voting.

Collins parlayed his exceptional performance into a six-year, 84 million dollar deal with the Washington Commanders.

A multitude of factors—injuries, coaching changes and position switches— played a role in Collins’ early exit from Washington. Winning might’ve helped gloss over Collins not reaching his full potential, but with only two playoff appearances for Washington in the last ten years, there wasn’t much patience.

Collins’ versatility and ability to play both off-ball linebacker and safety could make him an asset for a team that values players who can move around the field.

His experience and toughness could be an asset to teams in certain situations, and Collins could serve as an above-average depth piece for just about any team light on trustworthy defensive backs.