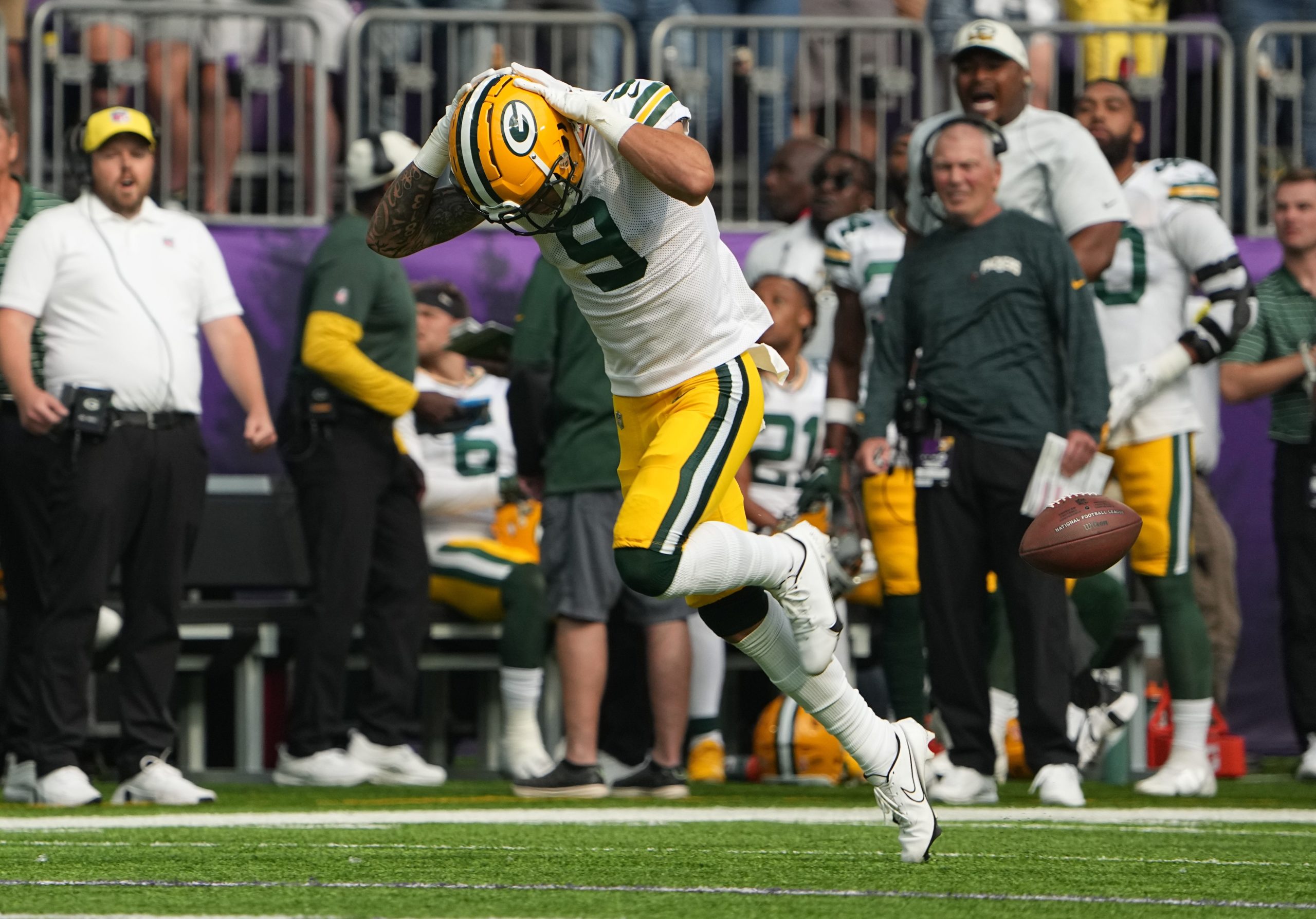 As we get ready for Week 2 of the NFL regular season, let me assure you of certain truths.

One, no team has yet been awarded the 2022 Lombardi Trophy. Two, no team has yet qualified for the playoffs. Three, no team’s season is “virtually over” because of an injury to a key player in Week 1. Four, the NFL does not award playoff spots based on power rankings. Playoff berths and seeding are earned on the field over 17 games.

You may have heard or read statements to the contrary based on the outcomes from Week 1. Don’t believe them. There are 16 games and four months left in this season. There is an incredible amount of good football yet to be played.

History tells us it will be very competitive and compelling.

What Did Week 1 Tell Us?

Since we only had three preseason games and many veteran starters, including veteran quarterbacks, played sparingly or not at all during those games, non-veteran teams were nowhere near as sharp as they will be in the coming weeks. We also no longer have two-a-day padded practices in training camp, thereby reducing critical “live reps.”

These missing plays reduce unit cohesion throughout your team. This is particularly true on the offensive line and among the quarterbacks and receivers. In short, Week 1 of the regular season is really preseason game 4.5. The .5 is because the game counts in the standings. It is played with 48 men, not the 80 or so in the preseason, and many are rookies and free agents new to their teams. In a very real sense, a significant portion of last week’s lineups hadn’t played together in a game that counts.

Welcome to the NFL, young men!

There are real football reasons why teams lose on any given week. Let’s explore some of those that surfaced in Week 1:

The Panthers had five fumbles on center-quarterback exchanges in their game with the Browns. If you can’t get the exchange right, it’s a long day.

Denver had two fumbles on the Seattle 1-yard line, both of which they lost. That left six points, at minimum, on the field. Much was made of Denver coach Nathaniel Hackett’s call to try a 64-yard field goal at the end of the game rather than use his timeouts with 20 seconds left and trust Russell Wilson to convert a fourth-and-five. By the way, in the history of the NFL there have been only two made field goals over 64 yards. On the other hand, Russ is about 40% converting fourth-and-six or less. Be that as it may, had the Broncos converted on one of those goal-line situations rather than fumbling, the end-of-game field-goal decision is likely moot. That is the point. Turnovers kill you.

This is another issue that manifests itself early in the season. It is most prevalent in the O-line and among the receivers and quarterbacks, though not limited to them only. As an example, Aaron Rodgers did not play at all in the preseason and his No. 1 target last season, Davante Adams, went to Las Vegas in free agency. The Packers’ receiving corps now consists of holdovers Allen Lazard and Randall Cobb, free-agent acquisition Sammy Watkins, rookie second-rounder Christian Watson and fourth-rounder Romeo Doubs. Three of the five had never played a game with Rodgers.

Rodgers was 22-of-34 for 64.7 percent, which is not bad. However, he threw for zero touchdowns, had one interception, and for him, an unbelievable 5.7 yards per pass attempt. His passer rating was an equally unbelievable, for him, 67.6. To top it off, Watson dropped a sure TD when he was at least five yards ahead of the nearest defender. This was a perfect example of very low unit cohesion.

Another example is the Panthers. They are breaking in a rookie first-rounder at left tackle, Ekwonu, and two free agents, Bradley Bozeman at center and Austin Corbett at right guard. Both vets are good players and the rookie shows promise, but they had played only one preseason half with newly-acquired QB Baker Mayfield. The upshot was five fumbles on quarterback-center exchanges and 54 yards rushing on 19 attempts, or a 2.8-yard average. Garrett got two sacks on Ekwonu. This is a prime example of the need for unit cohesion in order to play your best.

Matchups in the NFL may be among units (i.e. O-line vs. D-line); individuals (i.e. wide receiver vs. defensive back), or entire platoons (i.e. defense vs. the opposition’s passing game). In more than a few games there is a distinct advantage in one or more of these categories for one team over its opponent. Many times, these matchup advantages lead directly to victory.

Let’s look at two such games from Week 1. In the Bills-Rams opener, Buffalo’s defensive line, featuring newly-acquired free agent Von Miller and six other high-quality players, simply overwhelmed the Rams’ O-line, which had new starters at guard and left tackle. Rams right tackle Rob Havenstein is a good player but had his hands full with the great speed and agility of Miller. The Rams couldn’t help Havenstein very often because every other Bills rusher, plus a well-orchestrated stunt package, kept the other Rams’ O-linemen fully occupied. Yes, Josh Allen had a great second half, but the game was won by the dominance of the Bills’ D-line.

Another such mismatch occurred in the Bucs-Cowboys game. The Bucs’ defensive front features a group of quality players like tackle Vita Vea and linebackers Joe Tryon-Shoyinka, Devin White, Lavonte David and Shaq Barrett. They align in any number of fronts and confuse blocking schemes with multiple stunts and blitzes. They are a tough matchup for even a veteran offensive line.

Unfortunately for the Cowboys, largely because of injury, their offensive line was anything but veteran. Untested players Tyler Smith and Terence Steele manned both tackles, and in-game injury caused a backup to play at guard. The result was not pretty. The Dallas offense was essentially non-productive and Dak Prescott injured his throwing thumb because of the ferocious Bucs rush. There was neither unit cohesion nor competitive balance in the Cowboys’ O-line, thereby virtually dictating the game’s outcome.

There was a full moon last weekend, and it clearly affected NFL kicking games (just kidding … maybe). I have rarely witnessed as much kicking-game craziness in one week’s slate of games. Multiple kickoffs went out of bounds instead of into the end zone for touchbacks. This gifted the opposition with 15 penalty yards for nothing but lining up. There were missed game-winning field-goal attempts on multiple occasions by both teams in the Steelers-Bengals game and by the Colts in their tie with the Texans. Cincinnati’s long-snapper was injured and removed from the game, resulting in a botched field goal attempt.

The 58-yard game-winner by Cleveland vs. Carolina was set up by a blown intentional grounding call which should have resulted in a penalty of 10 yards and a 10-second clock run-off against Cleveland, thereby likely negating the attempt. The grand finale was, of course, the 64-yard game-winning attempt by Denver against Seattle, which knuckled left. Only two longer attempts have been made in all of NFL history.

There were penalties galore; a monsoon in Chicago, which turned Soldier Field into a mud pit, and more than few clock-management issues attributed to coach and player communication. That said, with few exceptions, the games were very competitive and entertaining. If your team lost, take heart. There is what used to be a full season left to play. If your team won, take a deep breath. There are 16 games remaining.

In about three weeks, with continued practice and game exposure, the rookie mistakes, sloppiness, unit cohesion, reduction in penalties and (hopefully) kicking mistakes will go away. Because of injuries and talent disparities, mismatches will still occur. Coaches, epitomized by the likes of Bill Belichick and Andy Reid, who know their teams’ strengths and weaknesses, will find ways to disguise and overcome shortcomings and accentuate strengths.

The good news is NFL football will only get better from here.