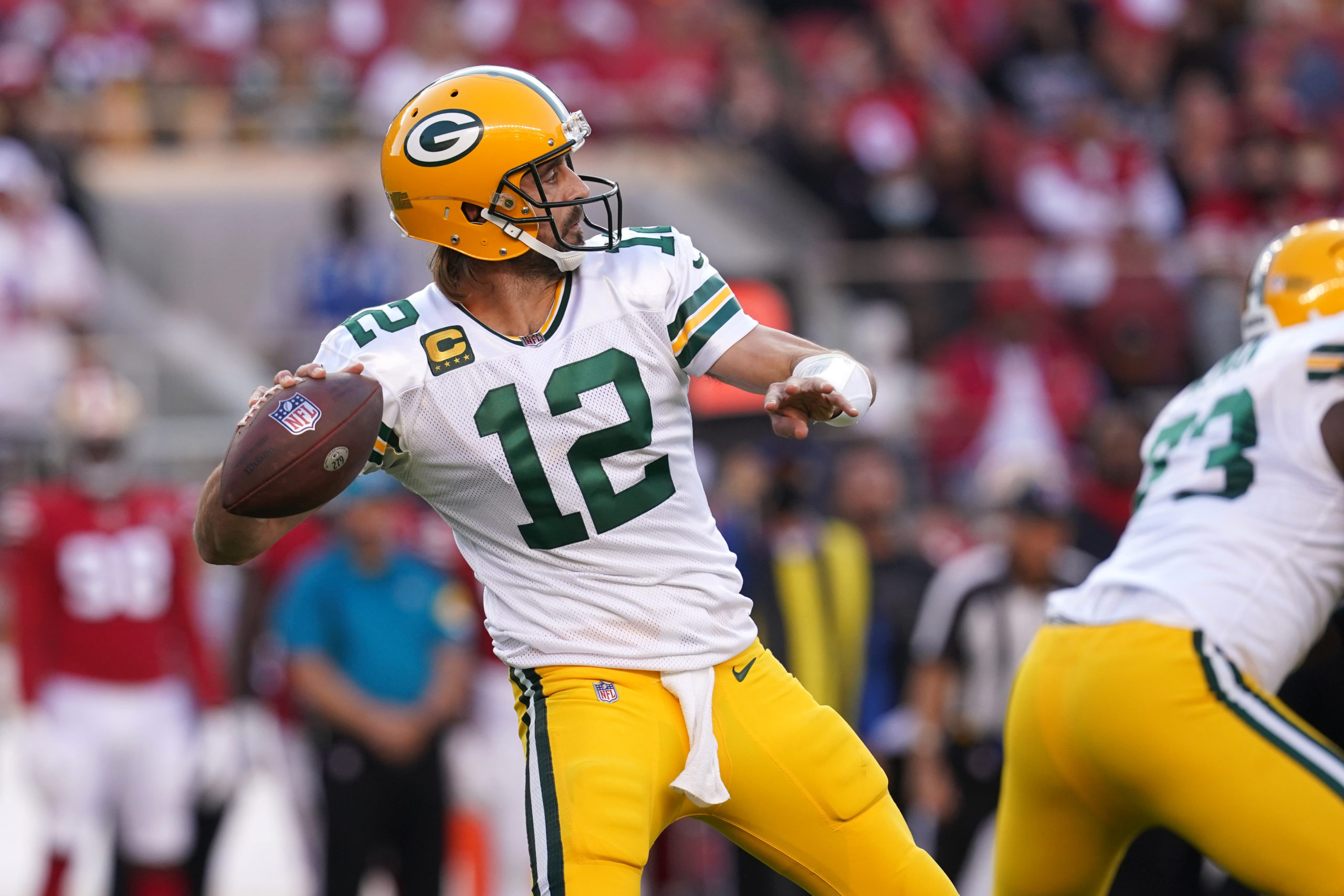 Week 1 proved what we already knew about the NFL: It’s a lot easier to pick the best and brightest in the AFC than it is the NFC. Buffalo. Kansas City. Cincinnati. The Chargers. Tennessee. Baltimore. Not all won in Week 1, but you can make a Super Bowl case for each. And the NFC? Good luck. The popular preseason favorite was Green Bay, mostly because it had the reigning MVP, an improved defense and no competition within its division.

Then the season began, and the Packers got waxed by Minnesota.

Now what? Well, we’ve seen this picture before, so we have a map to help us. A year ago, the Packers were on the wrong end of a 38-3 beatdown by New Orleans in game one when Aaron Rodgers had no touchdowns, 2 interceptions and a 36.8 passer rating.

The numbers weren’t much better this time around. Neither was the outcome.

So who do you trust in the NFC? Three of last year’s division leaders lost their openers, with Dallas suffering more than a defeat. The Cowboys lost quarterback Dak Prescott for 6-8 weeks. The Rams are the defending Super Bowl champions, but they weren’t equipped to match Buffalo on either side of the ball in their season opener. Then there’s Green Bay.

The Packers are better than they showed Sunday, but how much better? Rodgers’ favorite receiver, Davante Adams, was sent to Las Vegas, where he had 10 catches Sunday for 141 yards and a TD. Meanwhile, Green Bay’s new wide receiver group (which was missing the presumed No. 1 target, Allen Lazard) combined for 12 catches, 120 yards and no TDs.

This leaves Tampa Bay as the only division leader that survived, and the Bucs had all their bases covered vs. Dallas. Leonard Fournette ran for more than 100 yards. The defense was suffocating, both at the point of attack and in the secondary. And Tom Brady was Tom Brady, running his career record to 7-0 against the Cowboys.

But it’s a long season, a reshuffled offensive line could be a concern and Brady’s 45.

That’s a long way of saying the door to Super Bowl LVIII is wide open in the NFC. It’s not as strong at the top as the AFC, but it is more unpredictable. And that could make it more intriguing.

1. The hot seat just got warmer for Mike McCarthy. So he lost to Tampa Bay. It happens. But he lost Prescott 6-8 weeks to a hand injury, too … his team didn’t score a touchdown … his offensive line has more leaks than the S.S. Minnow … there’s no depth at wide receiver … and the penalties that were supposed to go away haven’t.

The NFL’s most-penalized team a year ago, Dallas was flagged 10 times in its season-opening loss to Tampa Bay. With McCarthy on double-secret probation, there’s no more wiggle room. Dan Quinn is on the Cowboys’ staff, and Sean Payton is on owner Jerry Jones’ speed dial. Be like Mike? Not in Dallas. Not now.

2. Maybe the Bengals should put Joe Burrow in witness protection. Why not? Nothing else seems to work. After he was sacked a league-high 70 times last season (including the playoffs), they promised to protect their most valuable asset. Except they didn’t. Not on Sunday, they didn’t, and the numbers speak for themselves. Burrow was sacked seven times, hurried eight, intercepted four and fumbled twice (he lost one).

Yes, he somehow put the Bengals in a position to win (that’s another story), but that’s not the point. He cannot and will not survive similar punishment for 17 weeks. If the Bengals are serious about returning to the playoffs, they should get serious about protecting their quarterback.

3. A “culture change” in New York? That’s what Hall of Fame linebacker Lawrence Taylor called the Giants’ comeback win over Tennessee, and he may be right. Down 13-0 at the half, the G-Men suddenly found something in Saquon Barkley and Daniel Jones and did what they weren’t supposed to do – climb off the mat and produce a last-minute upset.

That wouldn’t have happened a year ago. Or the year before. Until Sunday, the Giants dropped 10 of their previous 11 season openers. Then coach Brian Daboll showed up, and –presto! – they stole one from the Titans. Afterward, players danced with Daboll in the locker room, and tell me when you last saw that happen with this team. L.T. may be on to something.

4. Something is rotten in the state of Massachusetts. Reports out of Foxboro this summer suggested the Patriots’ offense was out of sync after former offensive coordinator Josh McDaniels left for Las Vegas. Coach Bill Belichick said it wasn’t, telling the Boston Globe that the play-calling was in good hands with assistants Joe Judge and Matt Patricia. “If it doesn’t go well,” Belichick said, “blame me.” It didn’t go well.

The Patriots scored just once in their opener, their offensive line was overrun, Mac Jones got hurt and New England lost for the eighth time in its last 10 trips to Miami. It’s way too soon to panic, but it’s not too soon for Patriots coaches to be on high alert. Pittsburgh is next up, and the Steelers just sacked Joe Burrow seven times and forced him into five turnovers, including a pick-six.

5. Trey Lance could be on a short leash. I know, it’s only one game … and the weather was miserable … and the field of play was more like a bog and … well, it’s only one game. But the 49ers’ quarterback was so underwhelming in a loss to Chicago … yes, Chicago … that the team’s hierarchy must be frazzled. It was so sold on Lance that it mortgaged the future to make him the third pick of the 2021 draft. That’s because coach Kyle Shanahan felt the dual-threat quarterback was more suited to his wide-open offense than his predecessor, Jimmy Garoppolo.

Maybe. But it didn’t look that way Sunday. Lance hit some big throws and ran for more yards than any 49ers’ running back. But he also missed big opportunities, committed a costly second-half interception and did little the last two quarters as the 49ers were outscored 19-3. More importantly, he lost. San Francisco believes it’s a Super Bowl threat, and it could be. But not if Lance doesn’t improve soon. Remember, the 49ers just re-signed Garoppolo to a cap-friendly deal with a no-trade clause, and when you watch Lance struggle, you understand why.

In Garoppolo, they have more than a safety net. They have a proven quarterback who is 31-14 with them in regular-season play and led them to a Super Bowl. Contrast that to the 8-29 record with 49ers’ quarterbacks not named Jimmy G, and you understand why they may have Lance on a short leash when facing Seattle, Denver and the Rams—in that order – the next three weeks.

1. Aaron Rodgers told Minnesota wide receiver Justin Jefferson he’s “the best player in the league.” Can’t wait to hear what he has to say to Aaron Donald when Green Bay plays the Rams on Dec. 19.

2. Home-field advantage is life support. At least, it is everywhere not named Lambeau Field. Entering Kickoff Weekend, there were 10 home underdogs. Cincinnati and Tennessee weren’t among them, but that didn’t stop them from going south. Home teams were 6-9-1 in Kickoff Weekend, and that dovetails with a trend that had them 140-131-1 in 2021 and 127-128-1 the year before.

3. Another sign of the NFC’s unpredictability: The NFC West. Take a quick look, and what do you see? One victory, that’s what. A year ago, the division was the conference’s strongest, with three playoff teams – including the Super Bowl winner. But now? The Rams, 49ers, Cards and Seahawks are a combined 1-3, thanks to Seattle’s Monday night win. A year ago at this time, they were 4-0.

4. Denver has more than goal-line fumbles and clock management to work on this week. How about club discipline? The Broncos were flagged 12 times for 106 yards Monday.

6. Apparently, the loss of Tyreek Hill didn’t hurt the Chiefs as much as critics imagined. That’s the takeaway after a weekend where Patrick Mahomes threw for 360 yards, five TDs and completions to nine targets. Kansas City rolled up 488 yards, put up 44 points, scored TDs on its first three series of the first and second halves and produced points on seven of its first nine possessions. Lesson learned. No Tyreek, no problem.

7. Before we start loading the Chiefs’ bandwagon, let’s see what happens when the Chargers travel to Arrowhead this week. Nobody plays Kansas City tougher. The past two years, the Bolts are 2-2 vs. the Chiefs, with the two losses coming in overtime. They scored 116 points; the Chiefs, 102. Mahomes vs. Herbert. It doesn’t get much better.

8. When you don’t win a division, you build your team to overcome the opponent who did. That’s what’s happened in L.A., where the Chargers paired pass rusher Khalil Mack with Joey Bosa to get after Mahomes. In his first game with the Bolts, Mack produced three sacks, four quarterback hits and one forced fumble. It was his first three-sack performance since Week 15 of the 2015 season.

9. Mike McDaniel is the first Dolphins’ head coach to win his debut since Nick Saban in 2005. That’s the good news. The bad: Saban lasted two seasons, going 15-17 before leaving for Alabama.

10. The Lions may be “starving,” as coach Dan Campbell put it this summer, but the “hyenas” refuse to get out of the way. Dating back to last season, four of Detroit’s last six losses have been by four or fewer points.

11. Never thought I’d say this, but … don’t sleep on the Giants in the NFC East. Yes, the New York Giants, who haven’t been to the playoffs since 2016 and who, prior to Sunday, were 22-59 the previous five seasons. That advice is based mostly on Sunday’s upset of Tennessee, and partly on the upcoming schedule. The G-Men are home the next three weeks vs. Carolina, Dallas and Chicago. Based on what we witnessed in the second half of Sunday’s upset of Tennessee — namely, the inspired play of Saquon Barkley and a gutsy two-point conversion — all are winnable.

13. One more reason not to bail on the Packers: They’re 2-2 in season openers under Matt LaFleur. They’re 37-9 in all other regular-season games.

14. The weekend’s worst visual: Adrian Peterson in the ring … as in boxing. Really, Adrian? That’s what it’s come to? The best visual: New York Jets fans standing to sing a chilling rendition of the National Anthem with a New York police officer on 9/11.

15. Atlanta coach Arthur Smith may not acknowledge his team’s history of second-half collapses, but he better correct it. Like it or not, it’s an issue that won’t go away. “You’ll continue to write our obituary,” an annoyed Smith told reporters after blowing a 16-point fourth-quarter lead Sunday. “Who cares?” He should. It marked the fifth time since blowing a 28-3 advantage in Super Bowl LI (and fourth in the past three seasons) that the Falcons squandered a lead of 16 points or more. Maybe they can work out a lend/lease deal with the hometown Braves to borrow pitcher Kenley Jansen on Sundays. Now, more than ever, they need a closer.