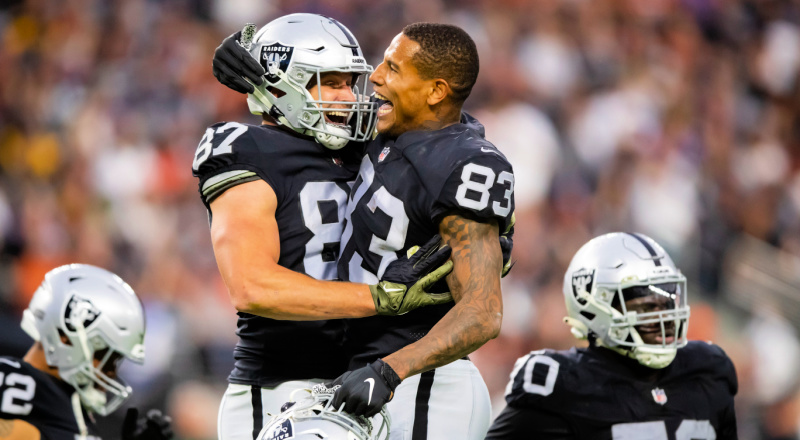 The 2021 Las Vegas Raiders made the playoffs and showed a lot of heart, despite all of the off-field distractions. These distractions caused roster and coaching turnover, but the Raiders rallied. With a new coaching staff and management, Las Vegas signed many of their homegrown players to extensions this offseason. Additionally, to keep up with the AFC arms race, the Raiders made moves for Davante Adams and Chandler Jones.

Below we break down the Raiders’ roster.

Explanation: Carr has been a consistent presence and leader for the Raiders over the last 8 seasons. He played really well last season and earned a new extension, locking him up for the future. Jarrett Stidham was brought over from New England with their new regime to lead a formidable depth group.

Read More: Is Derek Carr a Good Bet for MVP?

Explanation: Jacobs has been consistently productive over the past few seasons but had a down year as a rusher last season. Drake was signed in 2021, while Bolden was another player brought in from New England. This group can get the job done but Jacobs and Drake will need to play better than they did last year.

Explanation: The big move of the offseason was reuniting Davante Adams with Derek Carr. Adams will provide much help to the offense as he is arguably the best WR in football. Renfrow led this group in 2021 after a very good season and received an extension. Outside of the two, Cole, Robinson, and Hollins were all signed to provide a third option but will need to step up.

Explanation: Waller is and has been one of the best TEs in football and Derek Carr’s usual top option. Expect Waller to return to his 2020 form, while Foster Moreau provides some good depth, forming a very solid group at the TE position.

Explanation: If there is a position to be worried about on the offense, it is the OL group. Kolton Miller has proven to be effective at LT, while Andre James should continue to improve at C. However, outside of these two, there are many question marks along the OL. Between Leatherwood, Parker, and Simpson, they must improve for the sake of the group. Rookies Thayer Munford Jr. and Dylan Parham were drafted to help the group and could see time as first-year players.

Explanation: Another position that was a large focus during the offseason, as Pro-Bowl EDGE Maxx Crosby was extended, and Chandler Jones was traded for, forming one of the best pass rush duos in the league. However, the interior of the DL is a bit more of an unknown. While Bilal Nichols played well for the most part last season, Hankins and Butler have both not been great. Rookies Matthew Butler and Neil Farrell were drafted to help the unit.

Explanation: The Raiders’ LB group has not been very good in years past and is still not great. Denzel Perryman has proven to be very solid against the run, but Brown, Young, and Deablo have all not played consistently well or are too unproven. Their grade can improve but it will rely on the LBs playing better than they have in the past.

Explanation: Rock Ya-Sin was traded for this offseason and will have a good chance to prove he can be a full-time starter. Nate Hobbs was a late-round pick that really impressed last season, so another successful season will be very helpful. Mullen Jr has shown flashes but barely played last season so he must stay healthy and improve for this group’s success.

Explanation: The safety position has been highly invested in over the last few years, as it combines a few day one and two picks. Abram has struggled at times but has also shown some flashes, while Moehrig put together a nice rookie season, as they form a high potential duo in the secondary.